We use cookies on this site to enhance your user experience

By continuing to browse this site, you agree to this use. Learn More

Cleveland’s West Park neighborhood — located a few miles west of downtown — is an enclave for many of the city’s first responders and their families.

In 2002, neighborhood leaders worked with the city to build the Police and Firefighter Memorial along one of West Park’s main streets.  At the Memorial’s center is a stone pedestal engraved with names of the West Park resident officers and firefighters who died in the line of duty.  It is backed by a line of 23 U.S. flags — one for each honoree. The flags are individually and respectfully illuminated, allowing them to be flown 24 hours a day in accordance with the U.S. Flag Code.

“The Memorial is a place for the community to gather and remember neighbors who served and died in the line of duty,” says Denny McCafferty, a retired Cleveland firefighter and West Park resident, who now serves as the Memorial’s keeper.  “I run into neighbors there all the time.  Occasionally, I will see a vase of flowers or a wreath left by family members of the honored officers, often on the anniversary of their death. The Memorial has really become one of the symbols of the neighborhood.”

The Years Took Their Toll

Over the years, northeast Ohio’s notoriously cold and snowy winters took a toll on the Memorial’s lighting system.  Its location along a well-traveled street meant the original incandescent fixtures and wiring were exposed to nearly two decades’ worth of not only snow and rain but substantial quantities of road salt.

By the fall of 2018, Denny saw that only five of the original lights were still working. He knew something needed to be done: “A few of our firefighters work part-time as electricians, and I asked them to take a look. But unfortunately, none were able to help, as the lights and wiring were just so deteriorated.”

The Memorial’s financial support comes primarily through proceeds generated by an annual 5-mile road race through the neighborhood. The proceeds allow Denny a budget only for daily operations and basic maintenance. He knew he would need to rely on the generosity and expertise of others in the community to bring the Memorial back to life.

Denny contacted Kichler Lighting based in nearby Independence, Ohio. After viewing the Memorial and the condition of the original lighting system, company representatives agreed to donate new fixtures.

Kichler Lighting also contacted local landscape lighting contractor Dan Husney, owner of Litescapes by Husney, LLC, to ask if he would be willing to donate the labor. Dan has a long relationship with Kichler Lighting and frequently recommends the company’s products to his customers in the Cleveland area.

This design flexibility is ideal for the site as the output can be adjusted to accommodate any changes in the application or environment in the coming years. The 35-degree spread ensures the flags will be consistently illuminated, regardless of which direction the wind points them.

The fixtures are also engineered for durability. As with all of Kichler Lighting’s professional-grade, UL-certified landscape fixtures, the 12V LED VLO endures extensive environmental testing — rain, extreme heat, cold and UV — in the U.S. lighting  industry’s only class 4 lab. All components are fully sealed within the fixture’s capsule to be protected from moisture, salt, and other environmental conditions. An industry-leading 15-year warranty backs them so the community can rely on them for years to come.

“This is really Kichler Lighting’s top-of-the-line fixture,” says Dan, who installed the lights over the course of two days in October 2018.  “The optics are phenomenal and make the flags practically ‘glow’ in the dark of night. And the LED technology will help the community realize about a 75 to 80 percent savings in utility costs.”

Giving Back Is What This Is About

Reflecting on the opportunity to play a role in the Memorial’s refurbishment, Dan says, “Right after Kichler Lighting called me, I read some of the stories on the Memorial’s website about the honored officers and firefighters. They’re very moving, and I only needed to read a few to decide it was my civic duty to help.”

Tom Rowe, National Sales Manager Landscape, Kichler Lighting, comments on his company’s role: “We viewed this very much as a chance to support those who serve and protect us. Embracing the neighborhoods of our hometown is woven into the cultural fabric of Kichler Lighting, and we take the responsibility seriously. To have such an opportunity to give back to the community where we’re based, and where our employees and their families call home, has been a privilege.”

Adds Dan: “I think in this day and age, the term ‘give back’ is overused, but giving back is really what this was about.

The West Park Police and Firefighter Memorial will be rededicated in the spring of 2019. When that happens, a 24th illuminated flag will be added for Cleveland Police officer Vu Nguyen, a West Park resident who died in the line of duty in July 2018. His name and end of watch date will be added to the pedestal. His community will have a place to gather and remember his sacrifice for years to come. 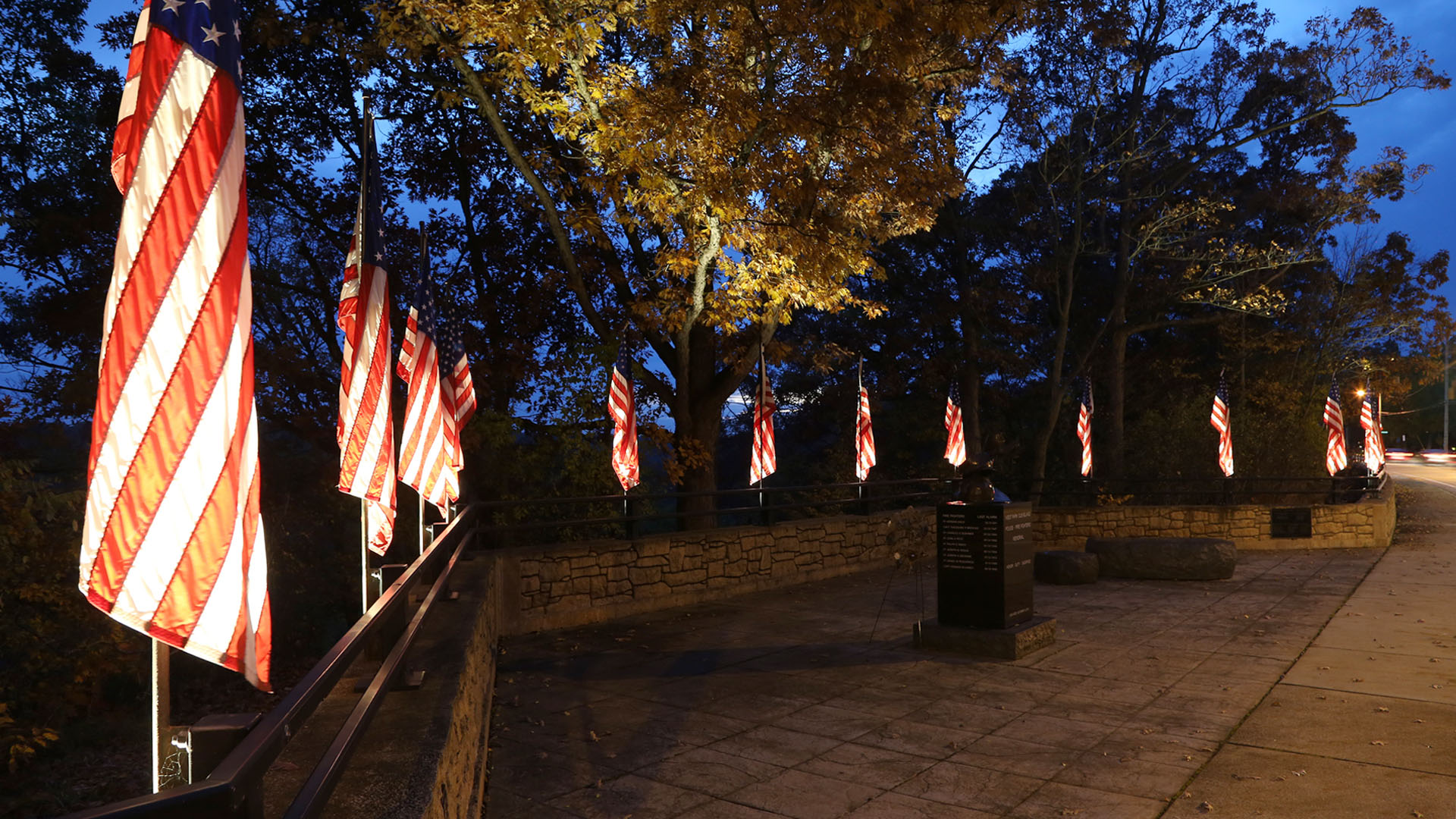 To learn more about the Memorial, visit Westparkmemorial.org.